It is essential that we all take on our responsibility

Luca Zausa: Some countries have decided to move away from the 2015 Paris Agreement on climate change mitigation. Market trends, on the other hand, show a growing interest in eco-sustainability. How much does the environmental impact of the project influence your choices?

Duncan Lewis: Regarding the environmental impact, it is essential that we all take on our responsibility and set real links between the planet and its inhabitants. A more durable equilibrium needs to be found. However, there is a risk of going from one extreme to another, which could lead only to a short-term trend. This would be disastrous. Nonetheless, we must be optimistic. The school at Revin is an effort to heal the open wounds, where the relationship between the building and existing environment was at the center of our preoccupation. Each of our projects is seen as a prototype that is enriched through a sensitive understanding of place and time. Our work is not based on law and science, but human values, in a relation to the physical environment.

Luca Zausa: What new idea or innovation is having the most significant impact on the sustainability of your projects?

Duncan Lewis: The idea of the Ecotone has been a key focus of my work for the past ten years. The creation of transition zones between two environments, between nature and human intervention, rather than dealing with architecture as an object, could be the future of building cohesion between landscape and architecture. At Revin, with my team, Duncan Lewis, Giacento and Off Architecture, we explored architecture as a transitional environment by working with a process of rebuilding the topography of the site to mimic the nearby mountain silhouette, and by re-dressing the building as much as possible with local vegetation found in the proximity of the project. The new school closely follows the topography of the land. It literally fits the bedrock which it occupies from the crest of the plateau all the way to the residential area that separates it from the river. The educational elements of the program are arranged in terraces and provide all the classrooms with a wide panoramic view across the valley to the south-west. The landscape finds itself within the center of the school and winds its way up through over 35 meters in height, discreetly echoing the course of the river. This new building environment for learning is at the crossroads between scale and location, between tensions and demands, between limits and borders. The project is not guided at all by the certification and official designation.

Our primary concern is the evolution of our contemporary world

Luca Zausa: What criteria do you use in choosing products and services in your projects? How big of a role sustainability of the products, service, or a supplier overall play in your decision?

Duncan Lewis: The criteria for choosing products and services, of course, is an important factor in the building process. However, it’s not what gives birth to the project. Our primary concern and overriding issue is the evolution of our contemporary world, based on human values and direct contact with the natural environment. 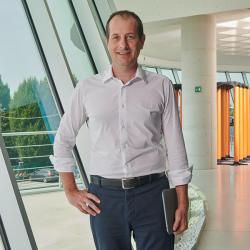